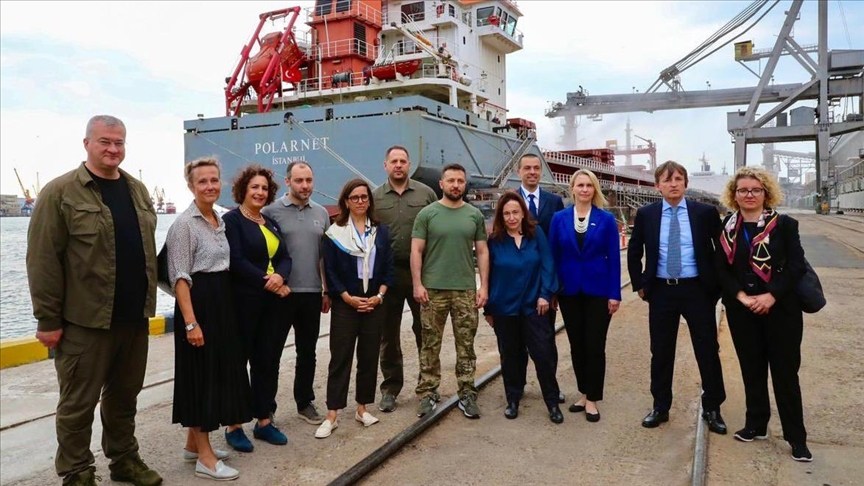 Chornomorsk, Ukraine, MINA – Ukraine’s president said on Friday (7/29), the first ship has been loading grain since Russia launched the war on February 24.

According to a presidential statement, President Volodymyr Zelensky observed the loading of Ukrainian grain onto a Turkish ship in the Ukrainian port of Chornomorsk, Anadolu report.

He said that Ukraine remains the guarantor of global food security, stressing that unblocking grain exports from Ukraine will prevent food shortages, as well as hunger and political unrest in countries in need. of food products.

“First ship, first loaded ship since the beginning of the war. It’s a Turkish ship. It shows that the port has started working,” Zelenskyy said.

He continued, grain exports would begin with the departure of several ships loaded before the war but unable to sail due to the war.

“Our camp is perfectly prepared. We are sending all the signals to our partners, the United Nations and Turkey, as well as to our military to ensure the security situation. The Minister of Infrastructure is in direct contact with the Turkish side and the UN, we are waiting for a signal from them so that we can start,” he added.

Ambassadors from the US, UK, Italy, Canada, Germany, Turkey as well as EU and UN officials were among those present alongside Zelenskyy.

Bringing hope for a solution to the food crisis, not just grain

Sharing photos of the port, the Turkish Embassy in Kyiv said the success of the historic agreement reached in Istanbul, Turkey to ensure that grain exports from Ukrainian ports would be important for the whole world.

“Today, as Turkiye, with the key role we played in reaching an agreement, we visited the ports of Chornomorsk and Odessa together with the Minister of Infrastructure of Ukraine. [Oleksandr] Kubrakov, UN and diplomatic representatives. We were received by President Zelenskyy,” he said.

Noting that the first ships to load grain had the Turkish flag, the embassy said these ships would bring hope for a solution to the food crisis, not just grain.

“In line with the spirit of the Istanbul Agreement, Turkey continues to work for the successful implementation of the agreement,” he added.

Turkey, the United Nations, Russia and Ukraine signed an agreement last week to reopen three Ukrainian ports, namely Odessa, Chernomorsk and Yuzhny for grain which had been stalled for months due to the Russian war. -current Ukrainian, which is now in its sixth month.

To oversee Ukraine’s grain exports, a joint coordination center in Istanbul was officially opened on Wednesday, staffed by representatives from Turkey, the United Nations, Russia and Ukraine to enable safe transportation, by merchant ships, commercial foodstuffs and fertilizers from the three main ports. on the Black Sea. (T/

=====
You want to get daily selected updates and special information about Palestine and the Islamic world from Minanews.net. Let’s join the Telegram group”MINA official broadcast“, how to click on the link https://t.me/kbminaofficial, then join. First you need to install the Telegram app on your mobile phone.