The G20 Development Ministerial Delegation is starting to arrive, welcome to Belitong! 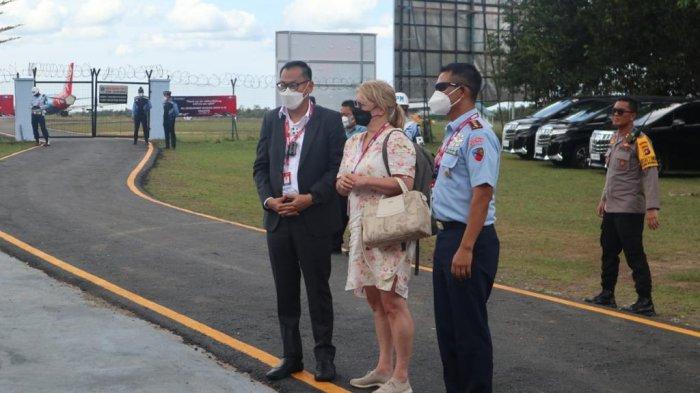 POSBELITUNG.CO, BELITUNG – The Citilink plane landed at H AS Hanandjoeddin airport in Belitung on Tuesday (6/9/2022) at around 1:20 p.m. WIB. The PLN electric car convoy was followed by Sub-Regent of Belitung Isyak Meirobie and Lt Col Danlanud HAS Hanandjoeddin (Nav) Rudy Hartono to support the arrival of an Australian delegation which arrived this afternoon.

A few minutes later, the group returned to Base Ops H AS Hanandjoeddin as a VIP room events The G20 Development Ministerial Meeting (DMM) from 7 to 9 September 2022.

The welcome dance accompanied by rhythmic Malay chants became the first treat for the two Australian delegates, namely Jennifer Doonohe as First Secretary Australia and Stephen Scoot as Deputy Ambassador. Then the group headed to the Base Ops VIP room to enjoy the treat welcome drink before heading venue principal at the Sheraton Hotel.

Several groups arrived using different airlines from morning to evening. Even the welcome procession was directed to two different locations. From Base Ops H AS Hananjoeddin for senior officials and from H AS Hanandjoeddin International Airport for non-ministerial delegations.

“All the welcoming processions went smoothly thanks to the cooperation of all parties. Tomorrow, another delegation of guests will come to attend the G20 DMM,” Isyak told Pos Belitung.

He seemed busy greeting guests from the international arrivals terminal at Base Ops. According to Isyak, the delegation that arrived included Senegal, Australia, Canada, England, the United Kingdom, India, Singapore, South Korea and South Africa.

“Representatives of the state and world institutions are starting to come to Belitung. Tomorrow (today, red) will come more,” he added.

Reception of non-ministerial delegates using the international terminal of HAS Hanandjoeddin airport. This international terminal was designed with this in mind. From the appearance of making simpor batik to trinkets in the terminal area. Writing giant letter Belitong on the word “Welcome to Belitong” inscribed in the airport area.

There are no regular passengers passing through this terminal when getting off the plane. When the non-ministerial delegation gets off the plane, they will be directed to the international terminal. This terminal area is fully guarded by the police and Avsec HAS Hanandjoeddin Airport. Including security forces providing sniffer dogs to detect inside the car.

Rescued from a slaughterhouse, 45 dogs sent to Canada for adoption – Solopos.com

SOLOPOS.COM – Workers prepare to put dogs in their cages to send them overseas to the Jakarta Animal Aid Network (JAAN) shelter, Gunung Sindur, Bogor Regency, West Java on Tuesday (20/9/2022). (Antara/Arif Firmansyah) SOLOPOS.COM – A dog is in a