Oki Setiana Dewi Returns to Expand Missionary Safari in US and Canada, Bringing Husband and Children 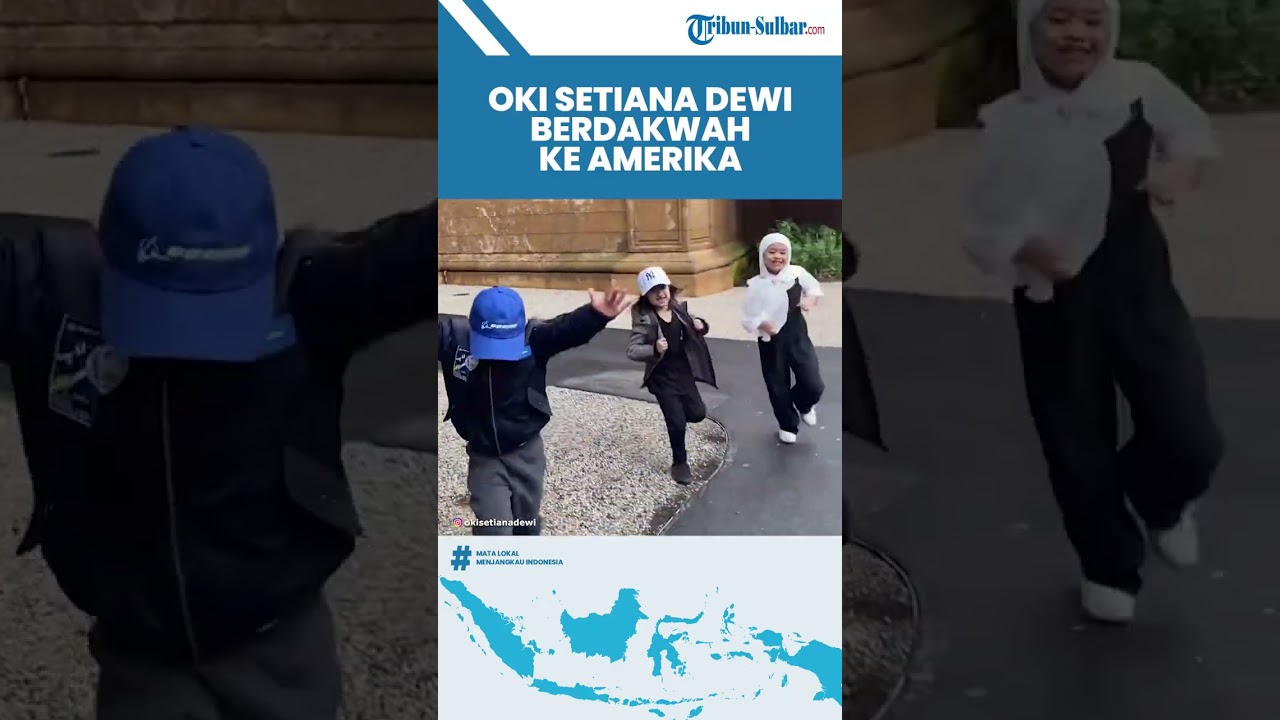 TRIBUN-VIDEO.COM – The beautiful actress and preacher Oki Setiana Dewi has just returned from her missionary activities in the land of Uncle Sam, the United States (US) and Canada.

Interestingly, this isn’t the first time Ria Ricis’ sister has given a talk in the United States.

Earlier in the same year, he also responded to the invitation of the Indonesian Muslim Society of America (IMSA) to give a talk to the Muslim community in Los Angeles (LA).

She even brought her husband, their three children and their mother with them.

So where were the da’wah activities carried out by Oki Setiana Dewi in the United States and Canada?

This da’wah activity was held at the IMAAM Center Mosque on December 20, 2022, at 7:00 p.m. local time to be precise.
He explained that the IMAAM Center is a mosque for the Indonesian Muslim community living in the United States.

“This mosque is the second mosque owned and operated by Indonesian Muslims after the Al-Hikmah Mosque in New York,” Oki said, in a statement on his Instagram account @okisetianadewi, quoted by Tribunnews on Saturday (14/1/2023) .

Afterwards, he and his family traveled to Boston, to attend the IMSA conference and to speak at the event held at the Double Tree By Hilton Hotel Boston from December 22-27, 2022.

Boston, he said, is the capital and largest city in the state of Massachusetts, United States, and was founded in 1630.

“This city is one of the oldest and wealthiest cities in the United States, with an economy based on (the areas of) education, healthcare, finance and high technology,” Oki explained.

Read: Inaugurated at the end of 2022, Masjid Raya Al Jabbar will become a Destination for Da’wah and Religious Tourism

In addition, Oki traveled to the neighboring United States, namely Canada, to attend a number of invitations.

In Toronto, he feels very comfortable because he believes the city makes every Muslim feel at home.

“The beauty of ukhuwah Islamiyah, while I was in Toronto, Canada, I just discovered how easy it is to be a Muslim here,” Oki said.

Indeed, various facilities as a Muslim can be obtained in this city.

From the mosque and easy to find halal food, to the very warm and enthusiastic Muslim community in practicing Islamic teachings.

After completing a number of da’wah activities in Toronto, Canada, Oki returned to the United States to deliver a talk at Al Hikmah Mosque in New York City on December 31, 2022.

“During my stay in New York, in addition to visiting the Al-Hikmah Mosque, I took time to visit the Islamic boarding school in Ustadz Shamsi Ali and visited Yale University,” Oki said. .

In Dallas, Oki was very enthusiastic about the idea of ​​meeting with the ulema to hear their point of view.

“There were a lot of unexpected things while I was here. When I found out I was going to Dallas, Texas, I also planned to meet with ustadz, scholars, institutes who are often here “Oki said.

After visiting Tulsa and Dallas, Oki also attended an invitation to the Seattle Mosque which is located in Washington State on January 7, 2023, at 7:00 p.m. local time to be precise.

This was the last place visited by Oki during his missionary safari in the United States.

He also praised San Francisco as a charming city.

“Masha Allah, this place is beautiful. The city is hilly and has uneven contours. The weather also tends to be cool all the time, the average throughout the year ranging from 13 degrees Celsius to 21 degrees Celsius “Oki said.

For almost a month, Oki carried out his da’wah mission in several major cities in the United States and Canada.

There, he indeed found a problem that is often experienced by Muslims in America, namely the difficulty of maintaining an identity as a Muslim in the midst of Western culture.

But on the other hand, Oki also sees that there are so many Indonesian Muslim organizations active and enthusiastic in carrying out their da’wah there.

Between two lectures, Oki pum takes the time to bring his children to visit the best campuses in the world such as Harvard University, the Massachusetts Institute of Technology (MIT) and Stanford University.

Visiting mosques or Islamic centers or campuses is a compulsory program for him whenever he travels abroad.

In this da’wah safari, besides himself, there was also Ustadz Adi Hidayat who participated in the group to be a speaker at an event held in the United States.

Please note that at the end of each year, around 1,500 people usually attend the recitation event called Muktamar and it takes place in various states of the United States.

This article was published on Tribunnews.com with the title