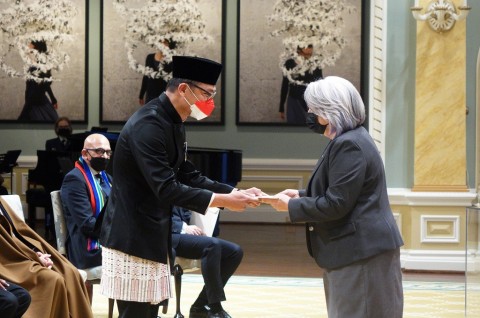 Ottawa: Ambassador Daniel Simanjuntak presented a letter of credence from President Joko Widodo to Governor General of Canada Mary Simon on April 27. The presentation of credentials is an important moment for an ambassador as a representative of the country because it is the symbolic reflection of his recognition by the recipient country.

“Indonesia and Canada have more similarities than differences. Both are great maritime nations, so Indonesia and Canada must continue to forge stronger and more strategic cooperation in the future,” Ambassador Daniel said on the veranda of Rideau Hall, the governor’s residence. -General of Canada. , according to Ministry of Foreign Affairs website information, Friday, April 29, 2022.


In addition, Ambassador Daniel will continue his efforts to encourage bilateral cooperation between Indonesia and Canada in various sectors, including environmentally friendly mobility technologies, renewable energy and environmental management. impact of climate change.

Ambassador Daniel also said that in a one-on-one discussion after the certificate ceremony, Governor General Simon expressed his gratitude for Indonesia’s leadership in the G20 and hoped that this could be used to encourage increased cooperation between Indonesia and Canada.

The Governor General also expressed his optimism regarding the Indonesia-Canada Economic Partnership Plan under the ICA-CEPA. With ICA-CEPA, it is hoped that Canada will be increasingly present in the Southeast Asian region.

Following discussions with the Governor General, a number of programs and activities at the Indonesian Embassy in Ottawa that previously existed will be continued and enhanced. Stating that the sustainability of the program plan is crucial, Ambassador Daniel shared several issues that had been on his agenda.

“The submission of this letter of credential is a strong disposition for me to encourage various concrete cooperation efforts between Indonesia and Canada, especially in the business sector,” Ambassador Daniel said.

He added that these various collaborations should help Indonesia in the recovery from the post-pandemic crisis. “If this is anything like a race at the Mandalika Circuit, the gas has been fully filled, now is the time for Gaspol to move forward,” Ambassador Daniel concluded.