Hanging out in a cafe during the G20, the Canadian-British PM ordered chicken Sambal Matah 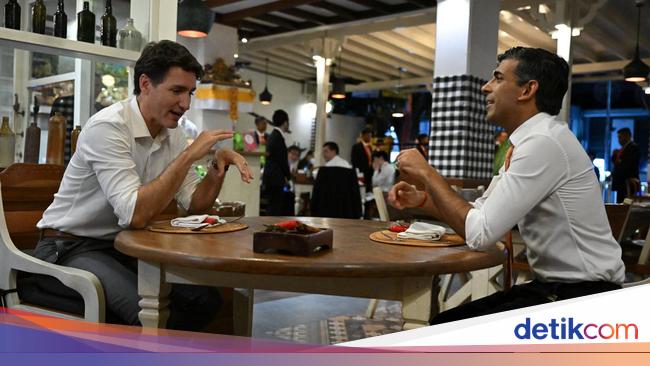 Canadian Prime Minister (PM) Justin Trudeau and British Prime Minister Rishi Sunak hang out together on the sidelines of the Group of Twenty Summit (G20 Summit). They hung out at Art Cafe Bumbu Bali and ordered chicken sambal matah.

Fabian revealed that the menu ordered was indeed the choice of the two heads of state. His party did not provide suggestions or menu suggestions to the two of them. After eating, the two PMs said the food ordered was delicious.

“They came back very happy. That’s the most important thing. The food, thank God, it’s delicious. That’s what I got. It’s delicious,” Fabian said.

According to Fabian, Justin Trudeau and Rishi Sunak came to his cafe around 8:30 p.m. WITA and left around 9:30 p.m. WITA. Because of this, the two met at Art Cafe Bumbu Bali for about an hour.

So far, Fabian has admitted he knows nothing about what the two heads of state discussed, so he had to meet informally outside of the G20 summit agenda. But he suspects it was done because the two met for the first time.

“I don’t know what was discussed, but it seems to be the first time he meets Canada and England,” he explained.

According to Fabian, the Japanese PM arrived about an hour earlier, around 7:30 p.m. WITA. He chose a seat upstairs and not at the same table with the Canadian PM and the British PM. However, the two met, took photos and shook hands.

So far, Fabian has admitted it’s like he can’t believe his cafe is being visited by three heads of state at once. Because usually VVIP visits are very often canceled due to the activities concerned.

“Usually if it’s VVIP it doesn’t happen in the end. It happened, wow,” Fabian said.

Meanwhile, when it comes to security issues, Fabian said it was not enforced too strictly, even though three prime ministers were visiting his cafe around the same time. Even then, he still had many other guests visiting his cafe.

“That night it was not only the Prime Minister (who had come). But there were also a lot of business guests that night. So it was not so strict when I think about it . Like friendship. Not too strict,” he added. said.

This is the first time Fabian has received a head of state class guest incident. He had previously received state guests, but only at ministerial level. Those who have been accepted are United States (US) Minister of Finance Janet Yellen and Minister of Tourism and Creative Economy (Menparekraf) Sandiaga Salahuddin Uno.

Moreover, Art Cafe Bumbu Bali is also visited by many artists. Now Fabian really hopes that his cafe can be frequented by President Joko Widodo (Jokowi).

“Let’s hope (who will visit the cafe later) Pak Jokowi. Let’s hope (can come). All the ministers have arrived. Pak Jokowi hasn’t arrived yet. Come on, sir, come on sir,” he asked.