For the protection of the natural and cultural environment of Bali, the application of contributions from foreign tourists was launched 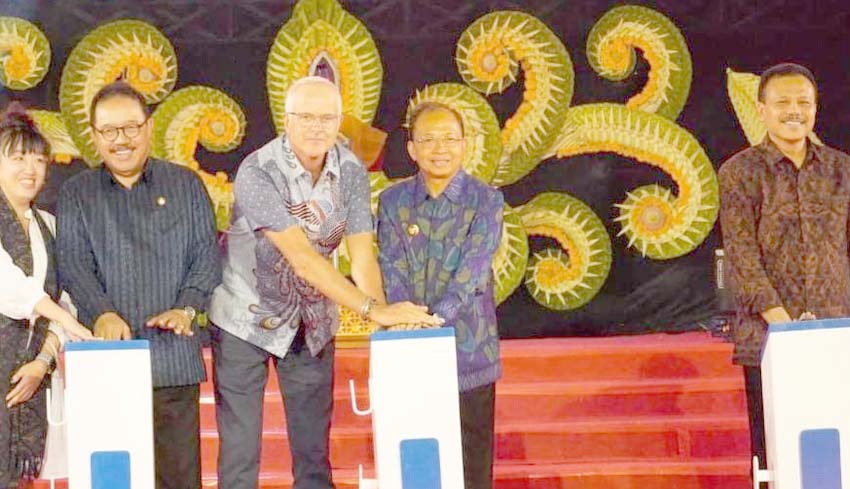 Governor Koster stressed that the contribution funds collected from foreign tourists would be professionally managed according to the principles of openness and accountability.

Governor of Bali Wayan Koster officially launched the implementation of the contribution of foreign tourists for the protection of the Balinese natural and cultural environment through the application “LoveBali” in Sukra Umanis Merakih, Friday (29/7) with Bali Deputy Governor Tjokorda Oka Artha Ardana Sukawati, Bali Provincial Secretary Dewa Made Indra, Consul General and Representatives of Friendly Countries, Head of Bali Regional OJK, Head of Bank Indonesia Representative Office in Bali, CEO of PT. BPD Bali, President of the Bali Chamber of Commerce, President of GIPI Bali, all presidents of tourism associations, heads of airlines, until witnessed by tourists from various countries who were present in the peninsula , Nusa Dua, Badung.

In his address, Governor Koster said that the development of Bali has been achieved with the vision of Nangun Sat Kerthi Loka Bali through a pattern of universe development planned towards a new era of Bali. This vision contains the meaning of maintaining the sanctity and harmony of Bali’s nature and its contents to realize a prosperous and happy life of Balinese manners, all the time.

It is also consistent with the Trisakti principles of Bung Karno: political sovereignty, economic independence and personality in culture, which are implemented through structured, comprehensive, planned, directed and integrated development within the framework of the state. Unitary Republic of Indonesia. based on Pancasila values ​​of June 1, 1945.

The local wisdom values ​​of Sad Kerthi are thoroughly applied in various aspects of Bali’s development, as a movement of change to conserve nature, humans and Balinese culture. “This movement aims at the same time to lay the foundation for a Balinese tourism based on culture, quality and dignity,” said the former member of the Indonesian Parliament during three terms of the PDIP faction.

In order to realize quality development, superior Balinese human resources (HR) are needed, which are pursued through various endeavors, namely: first, the realization of healthy and quality food; second, the provision of quality health services; third, to improve access and quality of education; and fourth, to apply the rules of Balinese life based on the local wisdom values ​​of Sad Kerthi.

Bali is also mentioned as the number one person in the provincial government of Bali who has wealth, uniqueness and cultural advantages, including:

various elements in the form of customs, traditions, arts and culture, and local wisdom. This gift of Hyang Creator in the form of wealth should be kept as strong as possible through various policies aimed at strengthening and advancing Balinese culture so that it remains strong and enduring in the face of the rapid currents of local, national and cultural development dynamics. world. “In addition to requiring healthy natural ecosystems, superior human resources and a beautiful culture, the implementation of tourism in Bali also requires connected and integrated land, sea and air infrastructure,” said the Governor of Bali and President of the IDP-P of the province of Bali. DPD.

Currently, Bali still lags far behind in infrastructure development compared to neighboring areas, so it is less able to compete. Therefore, Governor Koster is currently building infrastructure intensively, including in the form of: Shortened roads linking North Bali and South Bali; Sanur-Denpasar triangle port, Sampalan and Bias Munjul-Nusa Penida ports; and the Gilimanuk-Mengwi Toll Road. “Along with this development, I am also building Bali Cultural Center Area in Klungkung Regency and Turyapada KBS 6.0 Kerthi Bali Tower in Buleleng Regency,” explained the Governor of Bali, an ITB graduate, who was greeted by applause. Turyapada Tower KBS 6.0 Kerthi Bali at Buleleng Regency is a very monumental development that will become a new world-class tourist attraction. Even the Turyapada KBS 6.0 Kerthi Bali Tower under construction is designed to surpass 5 world famous towers, such as Eiffel Tower, Tokyo Tower, Toronto Tower, Macau Tower and Fernsehturm Tower.

All of Bali’s development efforts, especially those related to the protection of clean natural ecosystems, superior human resources, beautiful culture and quality infrastructure, really need adequate sources of funding. The current limited sources of funding require new sources of funding based on the existing potential, through foreign tourists who care and love Bali.

“That’s why I have to make a political choice

The contribution funds raised further indicate that Governor Koster will be professionally managed according to the principles of openness and accountability, the use of which will be prioritized for the protection of the natural environment, culture and infrastructure in order to improve the quality and competitiveness of Balinese tourism establishment to serve foreign tourists visiting Bali.

“In accordance with this, on behalf of the provincial government and the people of Bali, in all humility and respect, I urge foreign tourists from various countries who truly love and love Bali, to support this policy by contributing voluntarily, regardless of amount.. Bali belongs to all of us, belongs to the global community, we deserve to be called upon, to work together in a noble responsibility to jointly maintain the natural beauty and culture of Bali, and the hospitality of its people. For those who love Bali, for those who love Bali, I believe that I agree to contribute”, concluded Governor Koster while expressing his gratitude.

With the launch of the Foreign Tourist Contribution (Wisman) program for the protection of Bali’s natural and cultural environment, foreign tourists who have frequented the peninsula, Nusa Dua, Badung of Belgium, Korea, Australia, Canada, United States , UK, Switzerland, Sweden, Netherlands very much welcome Bali Governor Wayan Koster’s policy which he made by contributing directly through ‘LoveBali’ app. *nat