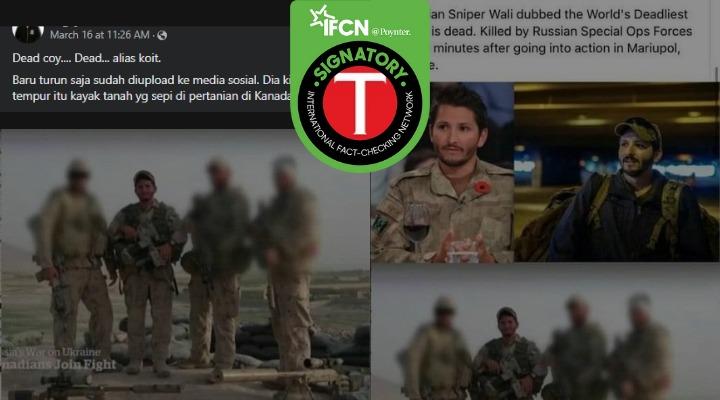 The post is a collage of 3 photos of a Canadian sniper named Wali with the caption: “Canadian sniper Wali dubbed the world’s deadliest sniper is dead. Killed by Russian special operations forces just 20 minutes after going into action in Mariupol, Ukraine.

The account that uploaded the photo provided a story, “It just dropped, it was uploaded to social media. He thinks the battlefield is like a wasteland on a farm in Canada.

Is it true that the Canadian sniper is dead?

Tempo is monitoring media coverage, particularly in Canada, to verify this information. From two media outlets in Canada, it can be seen that Wali is still alive. He also did not fight in Mariupol, but rather in Kyiv.

City of Radio Canada, Wali said he only returned to a safe place in Ukraine last Monday after a week of fighting Russian troops on the front lines in the Kyiv region. When he turned on his phone, he found hundreds of important messages from people who believed he had been killed.

His wife, father and friend sent frantic messages to confirm he was still alive. “I’m alive, as you can see,” Wali said in a video call on Tuesday. “Not a single scratch.

“I am the last person to know of my death.”

Misinformation about Wali has been circulating online for weeks in Canada, including claims that he is the world’s deadliest sniper and holds the record for long-range kills. A post on VKontakte, the Russian social media site now known as VK, claimed that Wali was killed by Russian special forces 20 minutes after arriving in Mariupol, a southern port city that had been besieged by the Russian troops.

‘It’s very amateurish. I have never seen Mariupol in my life,” Wali said (CBC News agreed to identify him only by his pseudonym to protect his family’s safety).

“I don’t understand why they’re doing this because it’s so amateurish.”

Wali also refuted claims that he was the deadliest sniper in the world. A few weeks ago, he says, he was working as a computer programmer in Canada and not actively training.

“I’m a good sniper,” Wali said. “No less, no more… I didn’t kill a Russian. I helped do it because snipers do a lot of sightings, reporting.”

Wali said that over the past week he has seen Russian troops fire indiscriminately at anything in their path.

The Guardian told CBC News it was still trying to respond to messages from people who learned of his death. Several friends asked about his personal history to test his identity, he said. Others have asked for photos or videos to prove he is still alive, he said.

Marcus Kolga of the Macdonald-Laurier Institute runs a Canadian and foreign disinformation watchdog platform. He investigated the Wali’s case and said it was clear it was “misinformation from the Russian government”.

“The purpose of this narrative is to discredit and discourage foreign volunteers,” Kolga said. “It is also intended to show the Russian people the power of Russian operations.”

The same news was published by Global News Canada. To this media, Wali said, “enough to eat, rest and all is well”.

Although he doesn’t know where the rumors came from, he said it came as a shock to him when he left the front lines a few days ago.

“I was the last to hear the news of my death,” he said.

“I thought it was just trolling. But I find it strange because over time the enemy will lose credibility with this propaganda. I don’t understand why they encourage such lies. It’s pretty obvious because after a few days I showed up and told everyone I was alive.”

He said he fought alongside the “exceptional” Ukrainian armed forces, along with his Canadian counterpart, and in recent days the group had taken over and made “progress against the enemy” in the areas where they were fighting. his group had shot people but not him.

Based on Tempo’s fact check, the claim that a Canadian sniper named Wali dies in just 20 minutes at the hands of Russian special forces is Wrong. From two media outlets in Canada, it can be seen that Wali is still alive. He also did not fight in Mariupol, but in Kyiv.