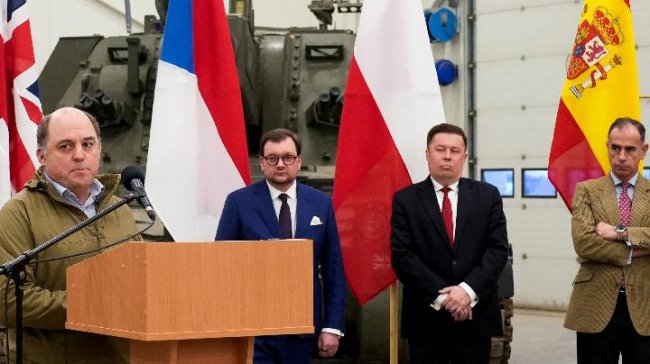 TEMPO.CO, Jakarta – A total of 11 member countries of the North Atlantic Treaty Organization (NATO), including Britain and Poland, on Thursday pledged new weapons to support Ukraine’s war against Russia.

This agreement comes a few hours before a meeting which will take place in Germany on Friday January 20, 2023.

“The West must remain united and continue to support Ukraine with military assistance,” Estonian Defense Minister Hanno Pevkur told a press conference in his country, held with his British counterpart and others. responsible. Reuters.

“What Ukraine needs most are heavy weapons. The toughest battle is yet to come,” Pevkur said.

Britain, which has announced plans to send tanks to Ukraine, will also send 600 Brimstone missiles, Defense Secretary Ben Wallace said when working out the details.

“Together, we will continue to help Ukraine move from resistance to the expulsion of Russian forces from Ukrainian soil. The new level of combat power required is achieved only by the combination of main battle tank squadrons, under air and missile defense, operating alongside divisional artillery groups, and other precision fire to target Russian logistics and command nodes in occupied territory.

Poland delivered S-60 anti-aircraft guns with 70,000 rounds and prepared to supply a company of German-made Leopard 2 tanks. That awaits a broader coalition of Leopard donors, according to a joint statement from the meeting.

The potential supply of Leopard tanks should be a priority when a wider group of nations, including the United States, meet at Germany’s Ramstein Air Base today.

The United States and Germany attempted Thursday to break a stalemate over Leopard tank support. The German government has so far refused to supply the tanks to Ukraine, but so far no conclusions have been made.

Kyiv has asked for the tank, which she says will help her turn the tide against Russian troops. Fearing that winter would give Russian forces time to regroup and launch a major offensive, Ukraine turned to German-made Leopard battle tanks, which are held by a number of countries in the world. NATO.

However, his transfer to Ukraine required German approval. “Our people are dying every day,” Ukrainian President Volodomyr Zelensky told German television. ARD, Thursday evening. “If you have a Leopard tank, give it to us.”

Ukraine needed it to defend itself, recover occupied lands and not plan to attack Russia, he added.

Hours after the meeting, the Danish government announced that it would donate 19 French-made Caesar howitzer artillery systems to Ukraine. This was in line with Ukrainian President Volodymyr Zelensky’s wishes, although it hampered the Nordic country’s military development.

Read also : World Top 3: German Leopard tanks, Serbia refuses to allow its citizens to be recruited for the war in Ukraine